At this time the re-created 16th carry either the standard .75 cal Short Land pattern musket with appropriate bayonet or the .65 caliber light infantry fusil. New members will be required to obtain the latter. 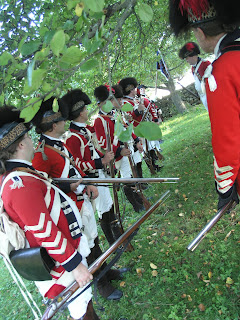 The 16th were also armed with the new 1776 Pattern Rifle thanks to the efforts of the commander, Col. William Harcourt. The 16th was second in line (to the 42nd Foot) to receive these fine rifles. Four were issued to each mounted troop and the dismounts were issue many more.

Officers were armed with their choice of firelock and may have purchased fusils or rifles of private manufacture or a choice of the two weapons mentioned above.

Bayonets were issued with each of muskets but not the rifles. It was necessary for the rifle armed men to work in conjunction with a file partner armed with a musket and bayonet to support the rifleman while he was reloading his slower loading rifle.

Officer were armed with cavalry swords. 37"straight blade single edged stirrup hilted light cavalry swords. These swords, of long length, were deadly from horse back as they could reach the enemy on foot as well as mounted. Officers on foot would be wise to carry a shorter sword for ease of use on foot.

Issued for cutting forage for the horses all the troopers of the 16th were issued a one handed billhook, a straight bladed cutting tool with a sharpened hook at the end. It was used for cutting forage for the horses or other camp purposes. Sometimes referred to as a fascine knife. It was carried in a leather case with a cord and was carried over the shoulder.

Belt axes or "tomahawks" were also carried by the dismounted men. This was hung along side the bayonet on the belt.